“I am John McAfee AMA!” Ask Me Anything session contains a lot of important aspects of John McAfee’s personal life. Some funny things, business decisions and also some tragic moments of hist life are discussed in this AMA.

Don't miss my AMA August 20th at 1pm PDT with @r_netsec Be more than a fly on the wall Sketch by @chad_essely pic.twitter.com/UDJ7c07zOm

First of all.. Who is John McAfee? 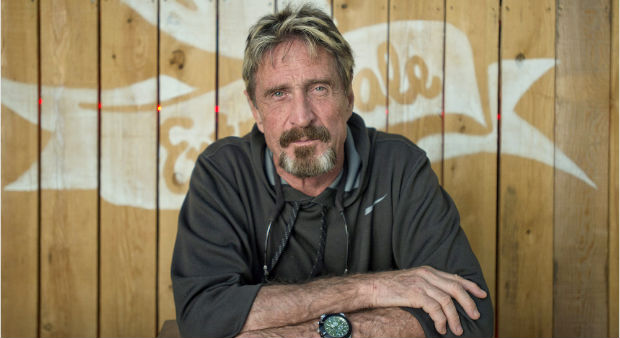 In the description of the Reddit AMA, McAfee calls himself Eccentric Millionaire & Still Alive.

John McAfee was born on 18 September, 1945. He grew up in Salem, Virginia, United States. He received a bacheloor’s degree in mathematics from Roanoke College in 1967 and his honorary Doctor of Science in 2008 from the same institution.

John McAfee is the developer of the first commercial antivirus program. The anti-virus was called McAfee for a few years, until it was sold to Intel and was given Intel name. According to Wikipedia, his wealth peaked at $100 million and that his investments suffered in the global crisis from 2007. McAfee was interested in the area of smartphone apps, yoga and natural antibiotics.

McAfee resided a few years in Belize, but he returned to the United States in 2013 after several disputes with the authorities from Belize and Guatemala.

Let’s get back to “I am John McAfee AMA!”

First I want to offer a few numbers in order to describe the audience. This AMA session received above 3500 upvotes. There were more than 1000 comments. More than one million peoples read John McAfee’s AMA on Reddit. And yes, this is a big number.

In the next parts of this article I want to present the hottest questions and answers.

A1: Holy shit. It will play the main role. Example: here’s what’s happening with IoT. Everyone who makes a toaster is rushing to make the first smart toaster. At DEF CON I attended a talk by Bishop where the BRINKS smart safe (touted as best safe in the world). Brinks knows how to make safes, their trucks are like tanks, but their smart safe came with the Windows OS and a USB port on it. The way they got into it was unscrew the front and there was a monitor and a red button. If you pushed the button it’d let you boot from other devices. It was insane, there was no components that were not off-the-shelf you can’t get at Best Buy. It took these hackers 30s to hack into the safe. THIS IS BRINKS, the make safes. You can’t expect a smart fridge to be any better. They all talk to each-other. China is probably waiting for us to tie everything together to electrocute everyone.

I had a long talk with sidragon that the hacks could have been done remotely over the internet. We’re in a dangerous situation with IoT.

Q2: Hey John, you have famously said that “Antivirus is dead”. I don’t disagree, and I am curious what security technologies you see as equally not useful. What are the next things that are going to “die”?

A2: Here’s the problem we’re having, people never factored smart-phones into the equation. People use their personal smart-phones to send work texts/email/docs. There are over 10k phone trojan apps disguised. We are in a new paradigm and the hacker world is leading by an order of magnitude. The first order of business is to develop better software. People hack code together, then do pen-testing later, that’s garbage. In the future, pair-programming between devs and hackers will allow for instant security feed-back.

The problem with many 0-day exploits take years to fix as they may be architectural in nature. We need hackers (white-hats) in the loop.

Q: Having spent much of your career detecting intrusion and evidence of unscrupulous computing must give you an interesting view of society. Can you apply lessons you’ve learned to other aspects of society? What the hell is wrong with us?

A: Here’s what I;ve learned. People will be people, you can trust no one. It’s not a bad thing/cynical. I trust people to be people, to act in their own self-interests. If you understand that, you can use that! People will be disloyal, I’ve heard there are wives that sleep around, etc. We are disloyal, bu loving, kind, gracious. We are a contradiction, the negatives are not bad if you see them for what they are. You cannot trust people, big deal, you CAN trust them to be self-interested, and I use that all the fucking time.

Q2: OT, but do anyone know exactly what went wrong with McAfee after the founder left the company?

A2: It grew, it got big, like every company. When I started, there were 4 of us. Generating $10M/yr, we could have lived happily for our lives on that. VCs came and offered to make it bigger, we had to grow, we didn’t have sales, marketing, etc. I gave it away, unless you were a government, corporation, etc.

Once I went public, I had 1000 bosses, investors, FTC, SEC, all my time in meetings and interviews. I hired a programmer/day for over a year! I used to spend time taking apart viruses, not I was an accountant. Once a company gets big, it becomes slow, and cannot survive in its current form.

Q3: You have a long history in hacking and in security, and I’m sure you’ve watched the landscape change a lot, over the last couple of decades. I know you made your own money in security, and as a hacker, but do you think we’ve reached a point where money may have started putting the final nails in hacker culture?

A3: Of course it does! First of all, your father probably told you, power corrupts, absolute power corrupts absolutely. Money corrupts. Once you have enough money, you have no friends, none, even the most dedicated friend you had cannot stop thinking about his mortgage, or new car, or new wife, and friendship ends.

Second, your life becomes a nightmare. I was getting 1000/day asking for help, or asking for me to invest (the best was rocket-power roller skates, I almost invested). Money now has become information, how does Google live? They gather information on smartphones and their services. This is far worse than paper. Paper doesn’t try to get into your head, to find out who you’re fucking, etc. We are all jealous, hopeful and ambitious, and as long as that exists we’ll all have chaos.

Q4: Any money making tips for us non assholes?

A4: Difficult to make money without being an asshole. Try developing some type of required Government corporate reporting software. It changes more rapidly than a chameleon crossing a Jackson Pollock painting. A non asshole can make it in that field.

Q: How do you feel about the country of Belize overall?

A: The most beautiful in the world. It has a barrier reef, 2nd in the world. I had 5 boats on the beach on the ocean, you try that anywhere else. It has jungles and ruins that haven’t even been explored. The problem is that it has people there, people descended from pirates.

There is nothing illegal that the government there is not into. The government is smart if you just go there as an American you will not be bothered. I lived in the jungles where I was the only white person, and they were on to me. They asked me for $2M, weeks later 40+ armed men stormed my house, shot my favorite dog, and held me in the sun with my hands tied. The next day the congressman came and apoligized and asked for the $2M again. I should have done that rather than tell him to get the fuck off my property.

Q: … so what do you think of the movie John Wick?

How To Uninstall McAfee Antivirus